I had the pleasure of attending the LA Baby Show downtown at the Reef this weekend. Having attended last year as well, I can honestly say that this year did not disappoint. Not only did the organizers bring in more vendors, but they also had more speakers, demonstrations and an even better organized event, spread out over two floors, instead of one.

I got there early, and found out I wasn't the only early bird excited for the event to start. The line  started even before check in with anxious parents and parents-to-be. 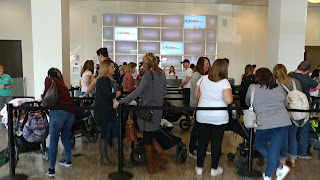 I headed straight to the blogger lounge to take advantage of the awesome services offered there before snapping any selfies. I got my make-up done by @chicstudios, who also offer classes on how to do your own make-up. After a lovely conversation I shuffled to the next chair over so I could get my hair done by @petitemason. I learned that their West Hollywood salon keeps hours that give us moms no excuse to give ourselves a little pampering (open late and on weekends too!) Now that I was camera ready, I could take the beautiful @SilverCrossUSA luxury stroller for a spin. 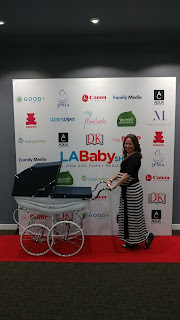 Once on the showroom floor, I ran into brand reps, that I've grown to call friends, saw new products from companies I already know and love, and learned about new products that one could even consider a "must-have" despite saving everything from baby #1.

I already have a jogging stroller and an umbrella stroller, and never quite found the need to for a portable playpen. But after chatting with the friendly folks @SummerInfant, I realized that an outdoor secure play space may be very necessary with an active five year old that is not planning on slowing down any time soon. Theirs even has a SPF cover, which is great if you want to avoid re-applying sunscreen throughout the day. I also checked out their 3DTote Convenience stroller.  You have to check out the amount of storage on this light stroller. Although it's not officially an umbrella stroller, it does fold pretty small and store like one.  Not only does it avoid the dreaded constantly dirty canopy that drives me crazy with my current umbrella stroller every time I fold it, but it also has special hooks on the handle that can hold a EXTRA heavy diaper bag that doesn't make the stroller flip over every time your kid gets out of the seat. How smart is that? 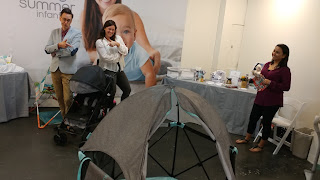 The extremely knowledgeable staff @diaperDekor introduced me to their new line of reuseable cloth pail liners for their already famous diaper pail. I used this pail with number one for disposable diapers, but once I switched to cloth, I had to have a separate hanging bag because they didn't fit right into the pail. Well now the problem is solved! It comes in a pack of two, which is perfect because while one is being washed with your soiled diapers, the other is in place for interim changes. Way to make it easy on us #clothdiaperparents. Their parent company, Regal Lager also has a line of @LovetoDreamUSA swaddles that come in three stages, the first of which allows babies to keep their arms up, similar to how they sleep in the womb. Genius, right? When my little guy first wriggled out of his swaddle, that was the exact position he was trying to get into. Their stage two has wings that zip off, allowing one or both arms to be free. Despite having a supply of swaddles already, I will definitely be adding an Organic Stage 1 Love to Dream swaddle to my collection.

Another really unique product I discovered is an adorable doll all the way from Iceland. It's called @Lulla_Doll and not only is it soft and snuggly without any sewn-on hazardous parts, it has a sound feature that mimics mom's heartbeat and breathing sounds to help baby fall back asleep. It runs for a full eight hours too! Fingers crossed I win their raffle for this adorable little guy, otherwise I will just have to get one shipped over across the Atlantic. Really ingenious idea! 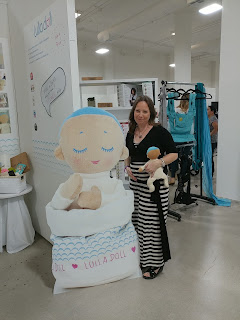 There were so many other great items I found, but these were some of my favorites I just had to share right away. If you're a parent who has saved everything from your little one and think you have everything you need, you may just find you will want more stuff this time around, especially five years later!

Posted by Francine Michelle at 10:29 AM