Shoemaker Without Shoes This Time Around

It's definitely been a long year of hurt, healing, acceptance and moving on.  Being able to finally bring myself to write down my feelings and share about my missed miscarriage last year was difficult, but definitely much easier to write about than it would have been six months ago.  But an unexpected difficulty came out of that experience as well, and that has been finding the courage to document this little rainbow I'm now carrying. I knew that I wanted to try again as soon as possible and was given the go ahead a month after the loss. But the fear of another miscarriage stayed with me more than after my first loss.

Last year I wrote about my feelings when I first found out I was expecting, I tracked my feelings as I shared the news and I took regular bump photos.  However, when I was fortunate enough to see that second line on July 6th, 2017, I quietly went to sleep and kept the news all to myself.  Would I be devastated again? How could I handle another loss?  It took five months to get pregnant last time, seven months this time, how long would it take again if this one didn't work out? How would I feel if I didn't see a little heartbeat at the first appointment? Instead of thinking about all the amazing things that were about to happen, I was already preparing myself for all the negative things that could happen, and therefore not allowing myself to be excited, which led to not feeling like documenting my thoughts. Somehow writing about my fears would make them more of a reality. Or conversely, writing about my excitement would only make it worse if it didn't work out.

Because my son was the first to learn of my loss last time and he didn't even know that I was pregnant to begin with, I decided to share the hopeful news with him early on and capture it on video.  One of my favorite parts of that video is him saying with such excitement in his voice "what if it works this time?" Even my four year old understood my trepidation. I shared the news with my husband by showing him that video. I told him that I didn't want to tell anyone, not until at least seeing a viable pregnancy. But then after seeing a heartbeat at 8 weeks, I still didn't want to share the news. I would wait until the results from my NIPT (non-invasive prenatal test).

I think nature plays a cruel joke on us preggos by causing so many horrible first trimester symptoms (especially at 40), all while you feel like you can't tell anyone why, especially after experiencing a loss, or in my case, two losses. I was hesitant to write out my feelings along the way, even though with each passing day of symptoms getting stronger, I had a strange feeling that everything was going to work out fine.  I don't remember that inkling of optimism last year.  So eventually I took a bump photo here and there, but refused to move into maternity clothes until it was absolutely necessary. I continued to hide my symptoms and exciting news from everyone, except my chiropractor, acupuncturist, and dentist (all for obvious reasons).  On a side note, I really feel like this pregnancy was helped to fruition by regularly seeing my chiropractor and acupuncturist, complemented by herbs and consciously trying to reduce my stress.

One thing I felt badly for not capturing with X's pregnancy was a gender reveal video. My husband and went for an elective 3D ultrasound at 13 weeks because we really wanted to know.  Our reactions aren't on video and after creating video baby books for clients that had this special moment, I knew I wanted one for this rainbow.  Despite the fact that I was still in my first trimester, we set up my "real" camera on a tripod and filmed ourselves biting into cupcakes with blue icing for our own little gender reveal, since no one else knew our news yet.

After the 12 week nuchal translucency scan combined with the favorable results from my NIPT, I knew it was finally time to spill the beans, at least to immediate family anyway. We captured video of sharing with both sets of grandparents in person (both of which had to have my big reveal t-shirt explained--clearly being vague is not the way to go if you want an immediate reaction).  I made a transfer of the image below and ironed it onto the back of my son's Batman t-shirt.  They thought it was a movie coming out next year??

I've also captured other family members reactions on film as well.  And now ss I've started to obviously show, I can't really keep the news to myself anymore.  Hopefully the few videos I've made and the journal entries I am finally getting to, will make up for my lack of documentation through the first half of this pregnancy. My little rainbow will have to forgive Mama, pregnancy hormones are crazy things! 20 weeks down, 20 to go! 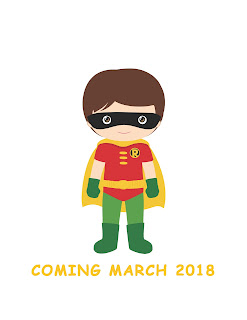 Posted by Francine Michelle at 3:07 PM