In Honor of Pregnancy and Infant Loss Awareness Month.... 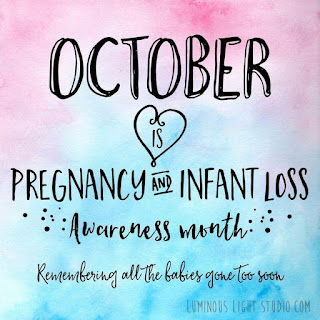 A year after my loss, I decided it was finally time to share, not only help myself heal further, but help others who may have experienced or may be experiencing the same thing.  Warning, detailed triggers regarding loss to follow.

I started a blog a little over a year ago called "Fit Pregnancy Pursuit." Last spring started HIIT (High Intensity Interval Training) and a few months into my new active lifestyle, I found out I was pregnant. I decided that this time around I would not gain almost a third of my weight, I would work out hard and continue to stay strong throughout the nine months and document what I was going through to inspire others to stay healthy during their pregnancies.  I purposely kept the blog "private," planning to share it upon reaching the second trimester. After experiencing an early loss before I had my son, I just wanted to make sure everything was okay before blurting the news out into the webiverse. But since I preach the importance of documenting everything, I didn't want to be a shoemaker without any shoes and started my blog about my experience early on.

I distinctly remember one of my last posts.  I had been having a particularly rough day at the gym, feeling frustrated from nausea and annoyed that I wasn't able to "push it" like I had prior to that second little line showing up.  Later that same day, I got to see and hear my little one's heartbeat on an ultrasound.  Because my first miscarriage was a blighted ovum, I thought that seeing a strong heartbeat, even at only six weeks, was a sign that all was good, I felt a huge sense of relief and excitement about the next seven and a half months and beyond.  I still hadn't broken the news publically, but started planning for a big reveal at Thanksgiving, when the whole family would be together. I was just about ready to make my blog public.

Fast forward two weeks, I pulled out my handy home doppler that helped me keep my sanity during my first pregnancy, and I wasn't able to find a heartbeat.  Although I knew it was early, I still was disappointed I couldn't find it. A week later I decided to go into the OB because my symptoms had started to wain and that got me worried.

The doctor and I chatted, I mentioned that I had seen a good, strong heartbeat at six weeks and we talked about usual early pregnancy things. I requested an ultrasound, even though she said there probably wasn't anything to worry about.  To this day, I'll never forget the look on her face as she scanned my abdomen, first routinely, then desperately looking for something. I felt the tears start to form. I knew before she even uttered a word. My son, who had no idea I was even pregnant, inherently picked up on the mood in the room and came over to me with great concern. My heart dropped. My tiny baby had passed.

Prior to that appointment, I was unfamiliar with the term "missed miscarriage." I thought that miscarriages only meant cramping and spotting.  I never knew that the embryo could pass and I would have no idea. A google search of the term made me realize just how common they are.

The doctor took me back into the examination room and gave me the low down on my choices: misoprostol or a D&C. I was devastated, and without my husband by my side to help me take a step back and analyze, I was lost.  I knew that I didn't want to have any surgery right away, and luckily the on-site pharmacy didn't have any misoprostol in stock.  Making a decision at that exact moment was not necessary.  The doctor told me that waiting too long could cause an infection, and even though my baby had passed two weeks prior, I still had some time to do my own research.

Ultimately I chose to give my body the time to figure out what had occurred on its own, hoping that route would help me to more naturally conceive sooner.  I had to make an appointment for two weeks later and really hoped that my body would figure itself out by then.  The next two weeks were excruciating emotionally.  Having to tell the even the small group of people I had shared the news with was like opening up the wound over and over again.  Knowing that I was still carrying that little tiny body inside and my body not doing anything about it made me frustrated and angry.

I returned to the gym with a vengeance, hoping that all I had done to avoid a miscarriage in the previous weeks would help bring on the miscarriage.  I tried acupuncture, herbs, essential oils and supplements to help my body move things along. Every time my son would see me cry he'd respond with "oh no, not again." I'm sure it was difficult for him to see his mommy so upset, and despite my trying to explain to him how that comment made me feel, it was just too much a four year old to empathize with.

The "not knowing when" was almost as hard to deal with as the loss itself. I hoped I wouldn't be alone with my son when it happened or that I wouldn't be out in public. Then thankfully, as if my body knew it was safe to do so, on a Sunday morning, I started to feel uncomfortable cramping. Thankfully my husband was home and able to keep my son occupied, although unfortunately that meant that I would have to deal with the pain, both physical and emotional, all on my own. It was so much like labor, but without the beautiful, amazing gift at the end. I knew I could do it physically, as I had given birth to my son without any medication, but without the natural high of knowing the light at the end of the tunnel was a beautiful child, it was emotionally excruciating.

Once I knew that it was finally over, I felt a sense of relief, but also a sense of further loss, as I was suddenly all alone once again. The physical pain ended long before the emotional pain dissipated. Ultimately though, that too began to fade. All loss is difficult, all loss takes its toll. With every comment of "is he your only one?" and "when are you going to have another?" I felt the need to let that person know that I had experienced a loss, even if it meant opening up that wound all over again. With time I was able to reply with "I guess I'm just meant to have two rainbow babies." Finding the hope in all the negative was the start of moving on.  Finding a way to celebrate others' pregnancy announcement and be truly happy for them got easier as well.  I still find my thoughts sometimes turning to "what might have been," but choose to consciously stop them and be happy now for what will be as I move forward.
Posted by Francine Michelle at 11:57 AM